I am the Champions!

Early in the year, I decided that I wanted to do more in 2011 than 2010. I also wanted to keep doing a lot of different kinds of riding and make the most of my bike collection. Hence my 5 grand goal – 1000 miles on 5 different bikes. One bike to look pretty and have hard to replace components, one to carry all sort of stuff, one bike to not have anything stolen off it, one to ride on anything, and a last bike to ride anything with a single gear.

Can you guess which is which (note: I snapped a frame this year)

Well I did it today. I am super proud to make this happen and possibly more on that later. More importantly, a New Years Eve day extravaganza of my favorite SF rides is in the works – likely culminating in a butter lap with my panniers full of beer (at least to start). Come join me.

Race Reports are for Suckers

The further I get behind on my race reports for the season, the more I come to realize there’s not always a story in a race report. People like stories. At least they’d prefer them I’d guess. So conflicted about writing race reports when my hearts not in it, or I don’t have anything interesting to say. Ah fuck it, here’s for posterity…

END_OF_DOCUMENT_TOKEN_TO_BE_REPLACED

My return to Sierra Point was two years in the making. My initial experience there was in my first year racing. The result – a DNS. The rare abbreviation: did not start. Yeah, endo-ing in the pre-ride is pretty pro. This time around, I raced probably one of my cleanest races to date. Certainly my best single speed effort. Of course that doesn’t necessarily translate into placing. Not that it really matters.

Turn that grimace into a pain face (courtesy of Kevin White)

END_OF_DOCUMENT_TOKEN_TO_BE_REPLACED

So I led the Cat C field after the first lap and managed to get 4th overall at Stafford Lake. I know what you’re thinking – “How is that possible? Aren’t you slow?” That’s what I thought too, but with just the right conditions strange things can happen: even I can be a sandbagger. 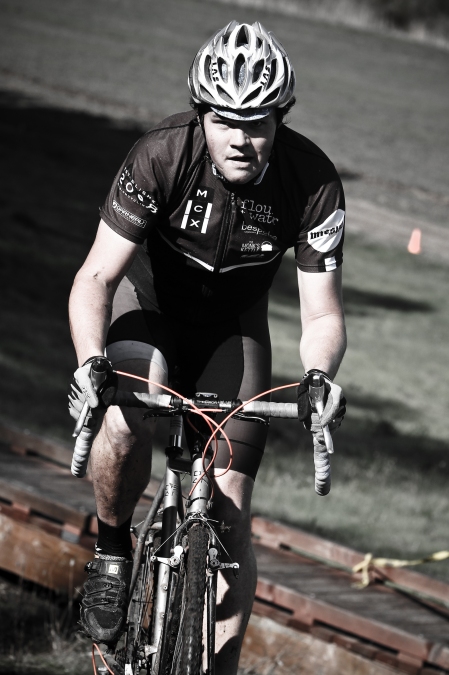 If you’re going to be a sandbagger, make sure it looks like you’re working hard (photo by Veronika Lenzi)

END_OF_DOCUMENT_TOKEN_TO_BE_REPLACED

I don’t know what it is about Halloween weekend that means cross cranks the suffering up to 11. With the past couple years up in Astoria for a mudfest at the Cross Crusade series, this year promised to be drier with a trip down to Santa Cruz for Surf City. Luckily, relatively dry courses can still be painful.

[Did anyone get a picture of me trying to strangle myself with course tape?] END_OF_DOCUMENT_TOKEN_TO_BE_REPLACED

If you were at the Bay Area Superprestige at Candlestick Point and heard a loud noise about 45 seconds after the SS B race started, it was probably this: 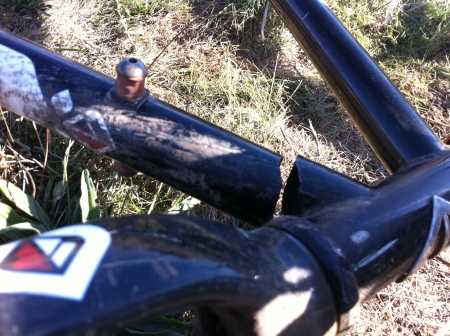 END_OF_DOCUMENT_TOKEN_TO_BE_REPLACED

It’s not enough to succeed, others must fail

Maybe their chain comes off in the first minute of the race. Perhaps it’s a flat half way through the race. They could always pre-reg and just fail to show up. Inevitably there are moments in cyclocross when someone else’s failure ends in your success. In my case, that is certainly relative. The slower you are, the more you relish these moments. Trying my best to race single speed this year has meant the competition is fast. Seriously- fast.

END_OF_DOCUMENT_TOKEN_TO_BE_REPLACED

In 2010, I owned 4 bikes. Through a bit of random luck and a last second push to get in a few miles before new years, I managed to ride over 800 miles on each of my bikes. I liked this a lot, and it largely happened on accident. I have 5 bikes now and decided I might as well try to ride at least 1,000 miles on each in 2011. Here’s how I’m doing: 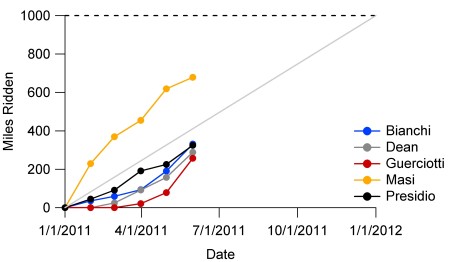 The gray line is how much I should be riding if everything were consistent year round. Obviously, they’re not. I’m behind schedule for now, but the prime riding months are here. For the benefit of who ever reads this I’ll occasionally update my progress to enable proper heckling.

For some reason, the Monkey Cross cyclocross series in Santa Rosa is known for mud. Monkey cross #2 showed us all what that really means. Mudfest, or whatever you’d prefer to call it, was a little bit muddy: