During the course of our crusade in Oregon, alongside all the driving, there was quite a bit of beer to be had…

Initially we were hoping for lunch at Deschutes Brewery in Bend, but no food at the brewery, only at their Pub on Bond Street. Luckily we had a tip about Cascade Lakes Brewpub not too far away. Normally I’m not a big brown fan, but they had a nice one. A fresh hoped brew and a kolsch were also good. Brewery #1 down. 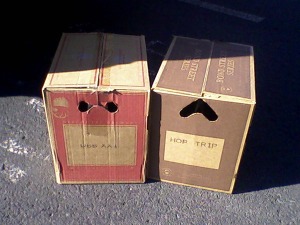 Onto Deschutes Brewery – let the pilgrimage begin. Jubelale and Hop Trip were my personal highlights out of the tasters I picked (I didn’t even bother tasting Black Butte since I drink too much of it anyway). For something considered a “craft” brewery, it was amazing to see the scale they are producing at these days. Their hop room was incredible. Bundles of whole hops everywhere. Definitely interesting to hear they dry-hop most of their beers. I left with a case of Black Butte XXI to age in the closet (best after 10/2010) and case of Hop Trip to split. So. Good. 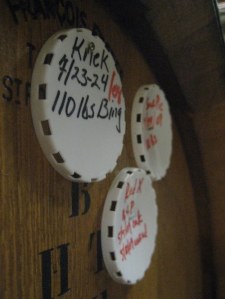 After making the drive up to Portland, we made our way to the Raccoon Lodge (Cascade Brewing) for dinner. A mere week before the trip we went to a beer & cheese night that featured their Kriek, so we were excited to check out what they had. They had our 3rd fresh hop beer of the trip and our first series of lambic-style sours. The collection of aging casks was awesome. Very unique for an America brewery. It’s apparently the new microbrew revolution. We tried their taster and I can’t say I was impressed with the IPAs and sours on tap, but it could’ve just been that I was drunk by then…

Next stop – Cross Crusade. While not technically an official brewery stop, our effort was sponsored by Van der Dans Brewery

since we enjoyed plenty of Crosstoberfest as we yelled and cow-belled on the racers after we had raced. More to come on that later.

Post race was followed by a short rest at the hotel, and then onto the Astoria Rogue Public House. It’s no secret, I love Dead Guy Ale. Add on the fact that Rogue makes a huge selection of delicious beers and we’r

e golden. Dinner and drink involved their Sesquicentennial (commissioned by Oregon for their anniversary), Imperial Porter (I love porters), and Double Dead Guy were all great. We sat at the bar, which was luck since a Cross Crusade guy came in with cowbells worn as rings. Everyone sitting at the bar was gifted a free Cross Crusade Cowbell. Good luck part 1. Ro

gue was also has a “Garage Sale.” That meant the two of us each got a case of Double Dead Guy for super cheap. Good luck part 2.

After dinner we dropped off our beer at the hotel and headed to Fort George Brewery. If only we hadn’t woken up at 5am, then we would’ve been able to handle more than a beer here, but we were dead (and no that had nothing to do with a halloween costume). We just grabbed one mason jar and we were done. Complete exhaustion.

Enjoying the extra hour of daylight, our next beer adventure was to Mainstreet Homebrew Supply in Hillsboro, a personal favorite for homebrew supply, whether local or mail-order. Here we picked up whole hops (yes!) and wax for coating the caps on our longer aged brews. Our Scotch ale with be the first test subject.

Next, we needed lunch before the bike show, so we stopped at Laurelwood in NW Portland. Vinter Varmer was definitely the highlight. Then after the bike show, we stopped at MacTarnahan’s Taproom (a Pyramid partner) a block away. Their Hum Bug’r was my favorite. Then onto Yamhill County to grab dinner with Mom at Golden Valley Brewing. Yet another fresh hoped beer here. It’s quite a trend the in the NW apparently. At this point it is not even 8pm and we are ready to curl up in a ditch due to exhaustion.

Monday morning, all we had left was a long drive back to San Francisco. On our way south we attempted a stop in Eugene for an early lunch and beer, but the recommended Ninkasi Brewery had no food and our attempt at two other brewpubs fail because they weren’t open yet. Onward. For dinner we took a similar tack and decided to divert to Chico and stop by Sierra Nevada. No proper tours on Mondays, but we thought we’d manage the self-guided tour. The girl in the shop said we could walk around upstairs even though there was a function happening. We tried and were promptly sent back downstairs like the heathens we obviously are. In defeat, we grabbed some of Sierra’s Estate brew. I tried it the other night and it is fantastic. If you’re ever in Chico grab some, since that’s the only place you’ll probably find it.

Altogether 9 breweries later we were back to the bay, with all sorts of fantastic beer in tow and all sorts of crazy ideas about our future brewing plans.

If you need me, I’ll be at the Crusades

No, I’m not talking King Richard and fighting for religious dominance. While this crusade will have marginally fewer bloodied bodies, the motivations are much purer – bikes and beer.

What started as an off-hand twitter comment that I should catch some Oregon cross racing when I’m home for Christmas was interpreted by my co-brewer/cyclist as a call to arms (along with dates for all the cross races, his availability, and which would be optimal). Initially it seemed like too much to just head north for a cyclocross race, but after spotting the Handmade Bicycle Show in Portland the same weekend, we had critical mass and we started getting serious…

After some discussions, we decided on the level of epicness for the weekend: ultimate. With stops at various breweries/brewpubs (see Deschutes Brewery, maybe Cascade Lakes Brewpub, Fanno Creek Brew Pub, Rogue Public House, Laurelwood Brewpub, Hopworks Urban Brewery, Raccoon Lodge), Cross Crusade in Astoria, Handmade Bike Show in Portland, and at least a case of homebrew between the two of us, it’s looking like we’ll accomplish our goal.

A mere 50 miles of road riding since the build up and it seems to be functioning. Currently with slicks for commuting, but throw some nobbies on and let’s go coat it in mud.

Mount up, we’re off to the Crusades!

I’m guessing that I’m not the only one out there that has decided bikes and beer go well together. Given our largely bike-based brewing operation, we are no exception at Van der Dans. Which is why when we had the chance to provide some homebrew for the greater good of cycling, we were all in. While I haven’t been able to get out on too many longer rides lately, my brewing partner had been making it out pretty frequently with the good folks from Mission Cycling. At a post ride event, he brought some of our Wit and Bock to share. During the conversation, Rapha’s Gentlemen’s Race and the case of beer entry fee came up. Wouldn’t it be cool to show up with some SF-made homebrew?

That night I get an email with subject “Van der Dans Wit Question” that described Rapha (just your friendly transcontinental ridiculously high-end cycling brand), the insanity that is the gentlemen’s ride, how Mission Cycling was invited, and could we donate a case of our recently brewed Wit to their cause. My response: “Do it.”

So all that was left was to make it presentable… Good thing, I’m not the marketing guru, because the beer would not have looked near as good: introducing the Mission Gentlemen’s Kristalwit

Our contribution can be found within the pre-race photos where the race start was staged in Otis, OR. The start of a 137 mile journey to Portland. Of course there’s lots more to marvel at with the write up from the Mission riders and the great photos from the event collected by Rapha. So anyway, amazing things have been happening on bike and beer front.